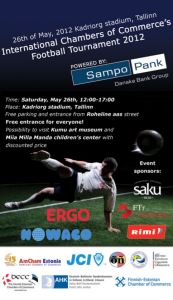 During the year 2012 it was once again it is time to compete in probably the most well-known and popular sports in the world – football. The chambers were lined up to compete for the year’s cup that was powered by Sampo Pank.

History of the event
The tournament’s tradition was initiated by the DECC in 2010, when the tournament took place for the first time. DECC’s long-term Business Plus chamber member, Sampo Pank has been supporting the event from the very first competition. We have annually had eight teams taking part of the tournament: American, British, Danish, Finnish, German, Spanish, Swedish and the Junior Chamber International.

Winning team of the tournament
2012 – British-Estonian Chamber of Commerce

To be updated soon!